I made some Bacon Enoki Wrap for New Year’s Eve dinner and got my inspiration from the western Bacon Wrapped Scallops and the Asian Beef Enoki Wrap. So, I came out with this East Meets West easy-to-make appetizer! It’s great finger food and does not require much time preparing it! =)

For those of you who’s not familiar or seen Enoki Mushrooms…these mushrooms are off white, long, thin and are very often used in Asian cuisine. You can get them fresh (packaged in a bundle) or canned. It is probably easier to get them at Asian grocery stores, but do check out the refrigerated sections where they sell mushrooms at your local grocery store for the fresh ones or the Asian Food aisle for the canned ones. Specialty Grocery Stores like Whole Foods where they carry a variety of exotic mushrooms would most likely have them! 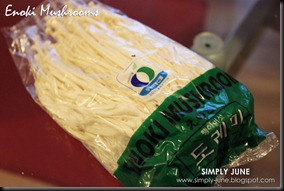 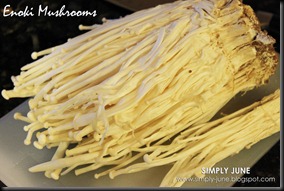 Next time you have a party, make this no fuss appetizers for your guests! =) 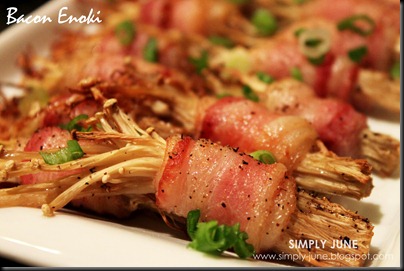 Preheat oven to 400F and line baking sheet with aluminum foil. Cut bacon strips into halves. Quickly rinse mushrooms and cut off about 1 inch from the ends. Separate enoki mushrooms into 18-20 smaller bundles. You will want a bundle of enoki mushroom on a half strip of bacon!

Take a tiny bundle of the enoki mushroom and place it about 1 inch from the end of the cut bacon. Stretch the bacon slightly as you roll and wrap the enoki mushrooms. Place the bacon seam side down on baking pan (lined with aluminum foil). Sprinkle with some black pepper and bake bacon enoki rolls for about 15 minutes or until bacon is slightly golden brown. Transfer to serving platter, sprinkle with chopped green onions and serve warm (or at room temperature).

June’s Comments: Feel free to make bigger enoki bundle if you like! =) Also, feel free to add slices of red pepper or green onion strips to the enoki mushrooms when wrapping them to make them a little more intriguing!

Lets Talk Food! Or Not..

Cooks & Chefs Who Inspire Me 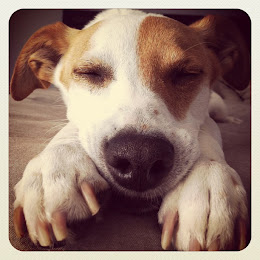 Our furry companion we adopted from the animal shelter back in March 2009.